A BRIEF HISTORY OF HENRY BOUQUET

Henry Bouquet was born in Rolle, Switzerland in 1719. A member of a prominent family, Bouquet began his military career at age 17 as a cadet in a Swiss regiment in the army of the Dutch Republic. Promoted to lieutenant during the War of Austrian Succession, the young Swiss soldier caught the eye of William IV, Prince of Orange and head of the Dutch Republic. The prince appointed Bouquet as lieutenant colonel of the Swiss Guards at The Hague.

While serving at The Hague in the United Provinces, Bouquet was able to expand his knowledge of mathematics and the sciences, as well as polish his social skills. Bouquet’s intellectual and cultural interests would eventually lead to friendships with Benjamin Franklin and other notable social and intellectual figures in the American colonies.

The Seven Years War (the French and Indian War in North America) broke out while Bouquet was still in the United Provinces. Following Braddock’s disastrous defeat in 1755, the British government planned to bolster their military strength in America by recruiting German and Swiss settlers in New York, Pennsylvania and the Carolinas to form the 60th (Royal American) Regiment of Foot. Sir Joseph York, British Ambassador to The Hague, recommended Bouquet to serve as one of the officers. Bouquet accepted a lieutenant colonel’s commission in the British army and set sail for North America in 1756.

After more than one year of recruiting for the Royal American Regiment, Bouquet was appointed second-in-command to Brigadier General John Forbes during his campaign against Fort Duquesne in 1758. Due to Forbes’ poor health, the responsibility of carrying out the campaign fell on Bouquet’s shoulders, including construction of the road that would bear his commander’s name. The campaign ended with the French destruction and evacuation of Fort Duquesne, as well as British possession of the fort, in November 1758. Bouquet remained in western Pennsylvania for the remainder of the war to ensure British military control of the region.

Bouquet was in command of Fort Pitt at the beginning of Pontiac’s War in 1763, but in Philadelphia at the time. He organized and led the expedition to relieve the beleaguered post, culminating in his victory over the Native American forces at Bushy Run and the relief of Fort Pitt. The results of the battle, as well as his successful campaign into the Ohio Country the following year, ended the Indian uprising and enabled westward expansion of British settlements.

Bouquet was promoted to the rank of brigadier general after his Ohio Country expedition and placed in command of the Southern District of North America. He was headquartered at Pensacola, Florida, where he caught yellow fever and died on September 2, 1765.

Colonel Henry Bouquet wrote two letters to his superior, General Jeffrey Amherst, describing the battle of Bushy Run. Included below are the texts of the two letters received by Amherst:

The Second Instant the Troops and Convoy arrived at Ligonier where I could obtain no Intelligence of the Enemy, The Expresses sent Since the beginning of July, having either been killed, or obliged to return, all the Passes being occupied by the Enemy. In this uncertainty I determined to leave all the Waggons with the Powder, and a quantity of Stores and Provisions at Ligonier, and on the 4th proceeded with the Troops & about 340 Horses loaded with Flour.

I intended to have halted to Day at Bushy Run / a mile beyond this Camp/ and after having refreshed the Men and Horses, to have marched in the night over Turtle Creek, a very dangerous Defile of Several Miles, commanded by high and craggy Hills; But at one o’Clock this afternoon, after a March of 17 miles, the savages suddenly attacked our advanced guard, which was immediately supported by the two light Infantry Companies of the 42d Regiment, who drove the Enemy from their Ambuscade, & pursued them a good Way. The savages returned to the attack and the Fire being obstinate on our Front and extending along our Flanks, we made a general Charge with the whole Line to dislodge the savages from the Heights, in which attempt we succeeded, without obtaining by it any decisive advantage, for as soon as they were driven from one Post, they appeared on another, till by continual Reinforcements, they were at last able to surround us, & attacked the Convoy lefft in our Rear: This obliged us to march back to protect it; The Action then became general, and though we were attacked on every Side, and the Savages exerted themselves with uncommon Resolution, they were constantly repulsed with Loss. We also Suffered considerably, Capt Lieut. Graham, and Lieut. James McIntosh of the 42d are killed, & Capt. Graham wounded.

Of the R.A.R. Lieut. Dow who acted as A.D.Q.M.G. is shot through the body. Of the 77th Lieut. Donald Campbell, and Mr. Peebles, a Volunteer, are wounded.

Our Loss in Men including Rangers and Drivers exceeds Sixty killed or Wounded.

The action has lasted from one o’Clock till Night, and we expect to begin again at Daybreak.

Whatever our Fate may be, I thought it necessary to give your Excellency this early Information, that you may, at all Events, take such Measures as you will think proper with the Provinces for their own Safety, and the Effectual relief of Fort Pitt, as in case of another Engagement, I fear insurmontable [sic] difficulties in protecting & transporting our Provisions; being already So much weakened by the Losses of this Day in Men and Horses, besides the additional Necessity of carrying the wounded, whose situation is truly deplorable.

I cannot sufficiently acknowledge the constant assistance I have received from Major Campbell during this long action, nor Express my admiration of the cool and steady behaviour of the Troops, who did not fire a Shot without orders, and drove the Enemy from their Posts with fixed Bayonets: The Conduct of the officers is much above my Praises.

I have the honor to be with great Respect

I had the honour to inform your Excellency in my Letter of yesterday of our first Engagement wth the Savages.

We took Post last night on the Hill where our Convoy halted when the Front was attacked / a commodious Piece of ground, & just Spacious enough for our Purpose/ There we encircled the whole & covered our wounded with the Flour Bags. In the morning the Savages Surrounded our Camp, at the distance of about 500 yards, & by Shouting and yelping quite round that extensive Circumference thought to have terrified us with their Numbers: They attacked us early, and under Favour of an incessant Fire, made Several bold Efforts to penetrate our Camp, and tho’ they failed in the attempt, our Situation was not the less perplexing, having experienced that brisk attacks had little Effect upon an Enemy who always gave way when pressed, and appeared again immediately. Our Troops were besides extremely fatigued with the long march, and as long action of the preceding Day, and distressed to the last Degree by a total want of Water, much more intolerable than the Enemy’s Fire.

Tied to our Convoy we could not lose Sight of it without exposing it & our wounded to fall a Prey to the Savages, who pressed upon us on every Side; and to move it was impracticable, having lost many Horses, and most of the Drives Stupefied by Fear, hid themselves in the Bushes, or were incapable of hearing or obeying any Orders.

The Savages growing every moment more audacious it was thought proper Still to increase their Confidence; by that means, if possible, to intice them to come close upon us, or to Stand their ground when attacked. With this View two Companies of Light Infantry were ordered within the Circle, & the Troops on their right and lefft opened their Files and filled up the Space; that it might Seem they were intended to cover the Retreat. The third Light Infantry Company, and the Grenadiers of the 42d were ordered to Support the two first Companies. This manoeuvre Succeeded to our Wish, for the few Troops who took Possession of the ground lately occupied by the two Light Infantry Companies, being brought in nearer to the Center of the Circle, The Barbarians mistaking these motions for a Retreat hurried headlong on, and advancing upon us with the most daring intrepidity galled us excessively with their heavy Fire; but at the very moment that certain of Success, they thought themselves Masters of the Camp, Major Campbell at the head of the two first Companies Sallied out, from a Part of the Hill they could not observe, and fell upon their right Flank. They resolutely returned the Fire, but could not Stand the irresistible Shock of our Men, who rushing in among them, killed many of them, and put the rest to Flight. The Orders Sent to the other two Companies were delivered So timely by Captain Basset, & executed with such celerity and Spirit that the routed Savages, who happened to run that moment before their Front, received their Full Fire, when uncovered by the Trees. The four Companies did not give them time to load a Second time, nor even to look behind them, but pursued them till they were totally dispersed. The lefft of the Savages, which had not been attacked, were kept in awe by the Remains of our Troops posted on the Brow of the Hill for that Purpose; nor durst they attempt to support, or assist their Right, but being witness to their Defeat, followed their Example and fled.

Our brave Men disdained so much to touch the dead Body of a vanquished Enemy that scarce a Scalp was taken, except by the Rangers & Pack Horse Drivers.

The Woods being now cleared and the Pursuit over, the four Companies took Possession of a Hill in our Front, and as soon as Litters could be made for the wounded, and the Flour and every thing destroyed, which for want of Horses could not be carried, we marched without molestation to this Camp. After the Severe Correction we had given the Savages a few hours before, it was natural to Suppose we Should enjoy Some Rest; but we had hardly fixed our Camp when they fired upon us again: This was very Provoking! However the Light Infantry dispersed them before they could receive Orders for that Purpose. I hope we Shall be no more disturbed, for if we have another Action, we Shall hardly be able to carry our wounded.

The behaviour of the Troops on this Occasion Speaks for itself So Strongly, that for me to attempt their Eulogium would but detract from their merit.

I have the honor to be most respectfully

Sir
Your most obedient & most Humble Servant
Henry Bouquet

P.S. I have the honor to Enclose the Return of the killed, Wounded, and missing in the two Engagements
H. B. 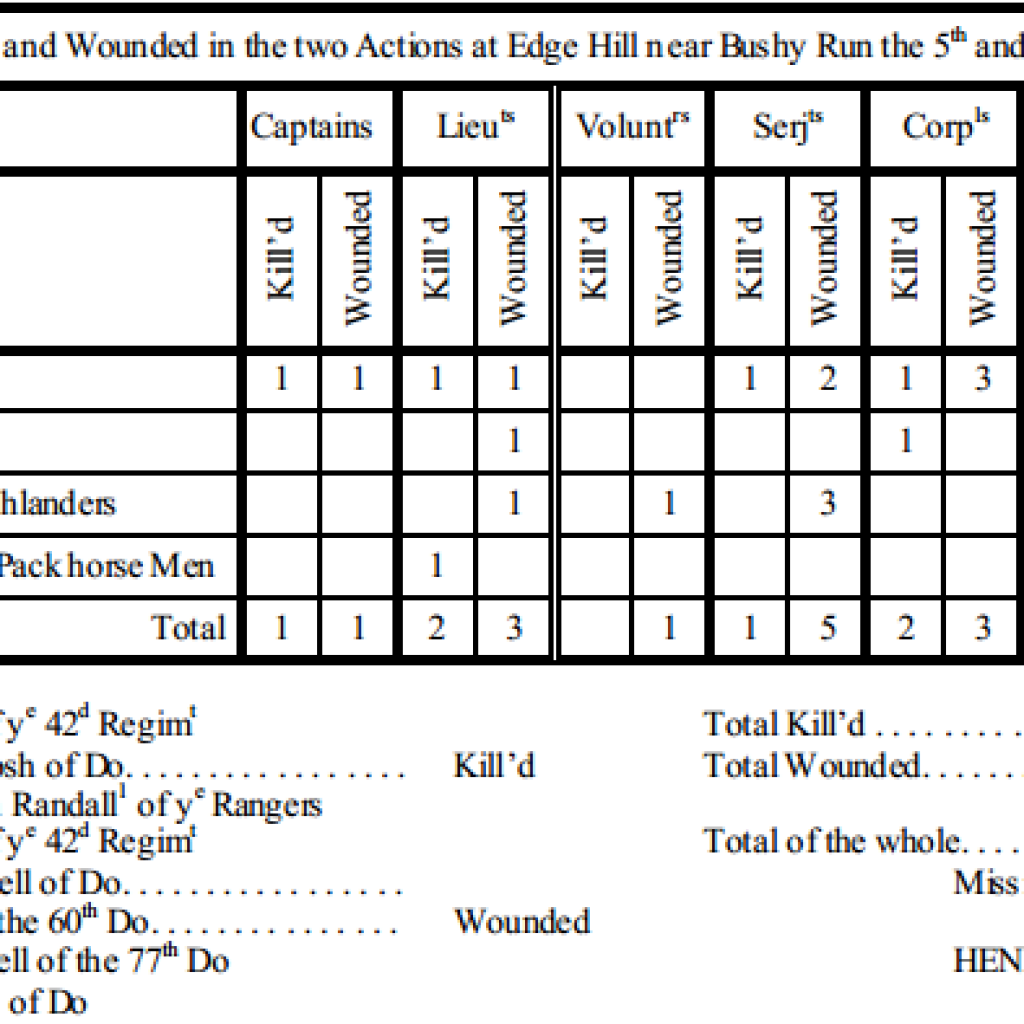